Resolution to send letter to Inslee passes 6-0 without Todd Donovan.

The whole meeting video is here

There is an easy scroll tool which allows a user to move forward and back with ease so a person does not have to listen to nearly 5 hours to get to the meat of the discussion.

The debate and discussion on the resolution and letter begin at about 4:10:00 in. And Todd Donovan decides to not participate in his office at 4:39:00 in.

Saying “I don’t want anything to do with this letter”; Councilman Todd

He continued stating that the discussion was “talking about conspiracy theories; about the Governor funneling money somewhere and talk about the Governor not wanting to open up until the Green New Deal has passed.  These are just idle comments.” He stated.

And finally: ” There is no reason to take this seriously after that sort of discussion so I would call the question but I think I will leave it with yall.”

With that he turned off his video and left the virtual meeting.

Here is the letter introduced by Councilman Ben Elenbaas that seems to have caused one Councilman Donovan to abandon the process of governing… it was  passed 6-0 by the Whatcom County Council. It asked the Governor for more flexibility for common sense reopening and explains reasons why. You decide whether this was simply grandstanding by a Council Person or a real problem. 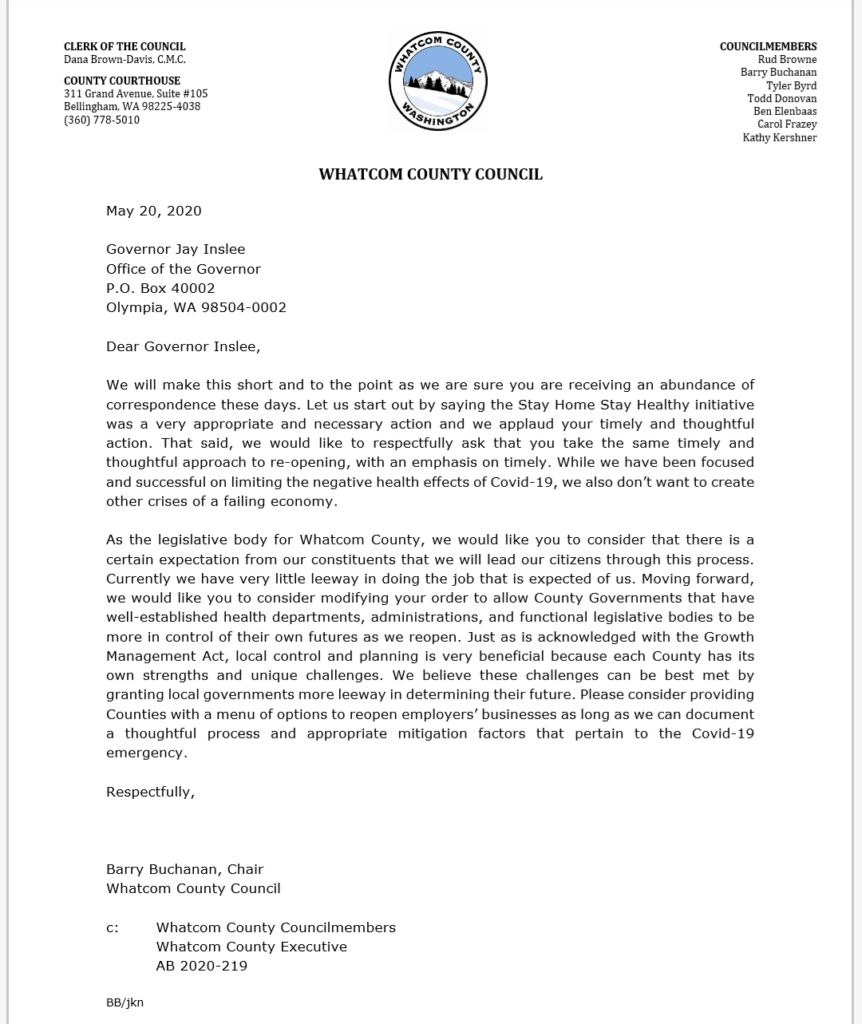 Since the lockdown of the state by Governor Inslee; two things have occurred concerning the operations of the County Council…

1.) They have gone to virtual meetings on a computer tool for such purposes transmitting from their homes and taking part without normal public input.

2.) A minority of the Council have been trying to get control back from the state to the extent of what a County Council, as chief governing body of the county is supposed to do.

Since the COVID crisis began it has often been difficult to tell who is running Whatcom County from a governing standpoint.

As in most Counties in the State the Governor’s office took over rule/law making… and in Whatcom County’s case the majority of county government elected officials have allowed this to continue without question well beyond the peak of cases in Whatcom County.

In addition at times the Health Department’s Ericka Launtenbach seems to have been in charge not allowing the Council to have some information because they “were not on the org chart”(story here).

And sometimes it seems to have been the “unified” command who really hasn’t seemed accountable to anyone.  Here is a page of their organization (you will note that the County Council or any Council for that matter is not a direct member).