Senator Ericksen:”Optimistic this can be done in September or October”

Monday Night September 11th at Rome Grange over 130 Whatcom Residents met to hear what local legislators had to say about the status of the legislation on reversing the “Hirst” decision that effectively has cut all new housing construction in Rural areas of Whatcom County.  In addition they were there to organize and formally organize a “Well Owner’s Caucus”.

According to Karen Brown, the evening’s organizer, many volunteers signed up to organize the Well Owner’s Caucus and they will be meeting shortly.  If you want to become involved you can E-Mail Karen Brown at: wcwellowners@gkbrown.com

Be involved and take action: Tell the Governor and Speaker Chopp that the Hirst vote is the top priority…

Senator Doug Ericksen and Representative Vince Buys attended the meeting as well as one of the litigants in the Hirst case: Wendy Harris.

Senator Ericksen: Pointed out that this is not a Treaty issue, not a Water for Fish Issue, not about Lummi and City of the Bellingham water issue for Indian Tribes.  This is about a Supreme Court overstepping its bounds.  The Senator also stated that the focus must continue to be the Hirst decision only and a vote must come in the house because the Senate has already passed a bi-partisan fix 4 times for the Hirst Decision.  Here is the Audio of Senator Ericksen’s statements:

New Tax Proposals involving the Hirst decision in Olympia from the Democrats abound.  Rep Vincent Buys shared that there were  Democrat proposals like the following that would increase permit  fees for Rural Builders AND require meters and their maintenance:

These proposals do not address the need for us to return to the Hirst Fix legislation at all; they are simply new unneeded tax and control measures that do not solve the problem and further damage our rural living.

RECENT NEWS OF NOTE ON REVERSING THE HIRST DECISION

August 30th 2017 Local environmentalist Democrats say an option for Hirst was presented by State House Democrats to extend Pre Hirst laws for two years  and this was refused by Republicans.  ABSOULTELY NO OPTION was brought to the floor of the State House by Majority Democrats to resolve this issue so Republicans could not refuse it.  As a matter of fact the House Democrats were AWOL the last day of the session altogether. One would hope all interested parties would want to finish the legislative process and have a vote on the floor of the State House of Representatives instead of inserting partisan politics into the issue that effects so many rural Washingtonians.(See Story Cascadia Weekly August 30th.)

September 11th 2017- Senator Judy Warnick of Eastern Washington’s 13th district sent  a Letter to Governor Inslee;  Warnick is the sponsor of the Senate Bill 5389 that passed the Senate 4 times; the letter urged the Governor to become a part of the process so that the Hirst bill can be passed as well as the Capital Budget.   A total of twenty one Senators signed this letter posted here. The bill number 5329 passed with a bipartisan vote of 28-21 click here for history of the bill.

Now, a new study put out by the Building Industry Association of Washington (BIAW) places a financial cost on legislative inaction.

Some of the details include: 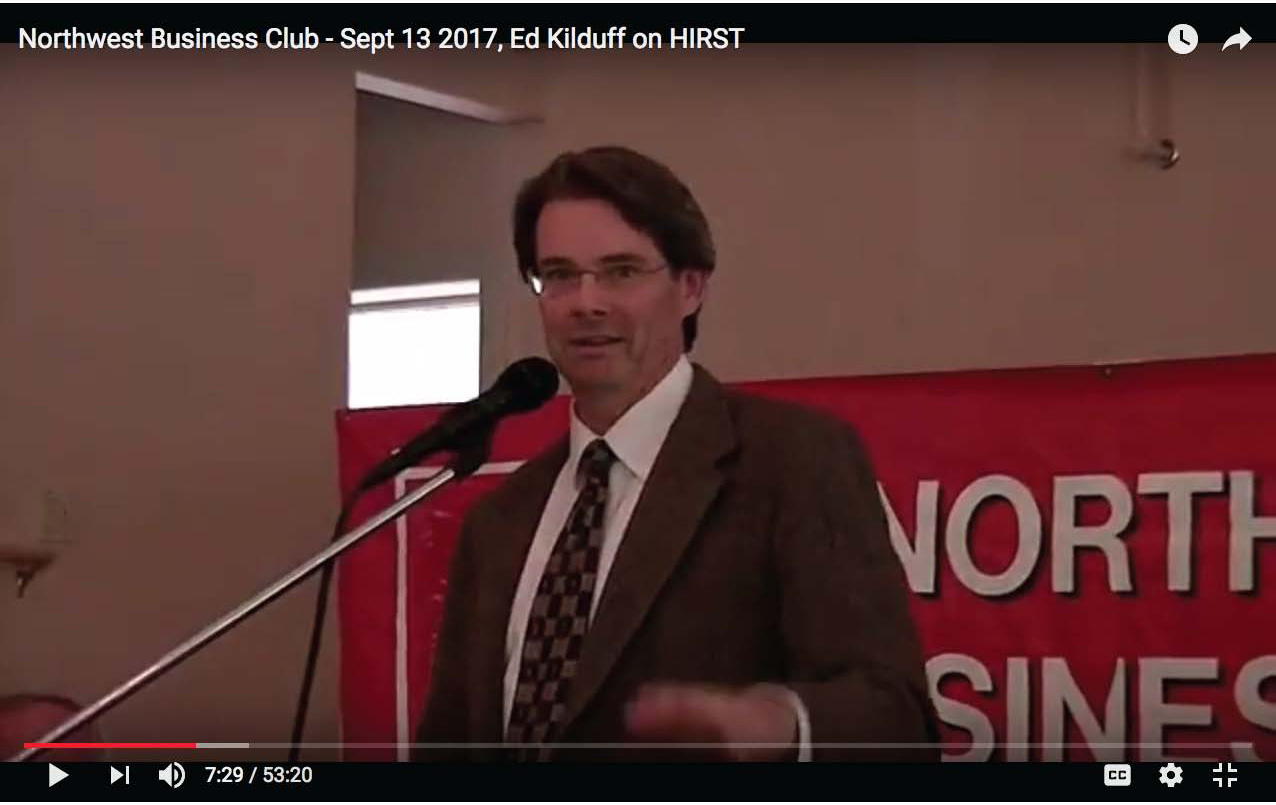 Renowned licensed hydrogeologist/engineering geologist Ed Kilduff presented an in-depth analysis of the crippling position that rural property owners find themselves in, in the wake of the WA Supreme Court “Hirst decision.”  Science is not being used to make these court decisions.  Early in the presentation the history is described. Here is the U-Tube video of his presentation.  The history of the legal tenets involved in Water and Hirst is interesting.

Past Stories on Hirst Presented by the Fourth Corner:

Legislative session ends with no Vote on Hirst.

Local Property Values to fall because of Hirst Decision.