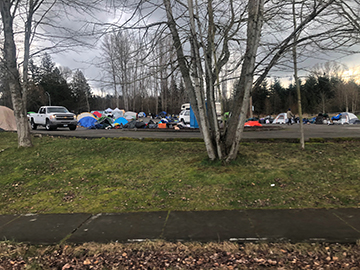 Did the cleanup of Thursday January 28th, 2021 change the situation for the “homeless problems” in Bellingham?… as far as we could tell it might have made it worse on the Businesses of Bellingham.  Now many of the People who “lived” in the City Hall/Library tent settlement have moved to an area around Civic Field .  They arrived during and after the cleanup on Fraser St in Bellingham just below the parking area of Civic Field.

As the pictures show the problem has just been moved out of sight at the City Complex and moved to Civic Field and surrounding neighborhoods.

“There is a lot to unpack here. Years of incompetent government policies that have made housing more expensive and less available. Attacks on our good paying industries. Drug abuse and mental health issues are a large part of the underlying problem with homelessness and until we are serious about addressing these issues, the problem will continue.”

The Management at Haskell Business Park Speaks out:

I wrote a letter to you on December 8th asking you to do something about the homeless camps on Fraser Street across from Haskell Business Center.  I did not receive any response from you on this matter.  Today you “cleared out” the homeless population at City Hall and the Library.  These people are currently moving to the Frank Geri ball field parking lot, directly across the street from the Haskell Business Center.  We have received calls from our tenants asking what we plan to do about this situation.  Included in these call are tenants asking to break their lease because they cannot handle the “heinous crimes”, vandalism, and “awful” and “deplorable” conditions that go along with this homeless encampment.  Our tenants do not feel safe anymore.  We have children attending classes in the Business Center after hours.   This is definitely not a safe situation for them.

We are requesting that you immediately move these people off of the City Park Department property.  Cleaning up the front of City Hall has simply transferred the homeless problem away from your property and onto ours.  Your issue is now gravely affecting dozens of small business owners including Haskell Business Center and every single one of our tenants, who rely on us to provide them a safe and clean property at which to conduct their business.  This transferring of the problem from your doorstep to ours is absolutely unacceptable and must be rectified immediately.  Until you move this camp, we request that you have 24 hour police presence on the site.  This situation will damage our business significantly if our tenants make a mass exodus to move out because you have failed to fix this.   We request a satisfactory response to our concerns today.  We hope it is not necessary for Haskell Business Center to engage an attorney to protect our tenants and our business interests.

Copied to the Fourth Corner as well: Emil Vinberg “I am shocked”

I AM SHOCKED that you put the interest of our public officials over our children.
The removal of the homeless encampment in front of City Hall, which was a welcome occurrence, has now resulted in a new encampment at or near Frank Geri Fields. The new location, while further from the city and county offices, is now in a residential area near:

This situation is unacceptable. We urge you in the strongest terms to come up with a solution to this crisis. Keep the camp out of neighborhoods and business districts. Do your duty as elected officials to protect the law-abiding citizens,children, businesses, and schools of your communities. Failure to act quickly may well result in costly legal action against the city and county, or, even worse, crimes against the citizenry.

Letter from another business: “AFresh” on Fraser Street

To whom it may concern:

We are two Licensed Respiratory Therapists and Business owners  of a Respiratory Therapy Services company, called, AFresh, on Fraser Street.  We are already servicing a vulnerable population in a vulnerable time, with the COVID pandemic still lingering on .  Yet, still, there are more  challenges for us.  PLEASE LISTEN TO US AND DON’T TURN YOUR BACKS!!!!

I am preparing  to call Kiro 7 News and have compiled videos, and pictures of the “new” camp spots going up ALL DAY TODAY! I think it will be of interest to them to  see how Bellingham is following in Seattle’s  steps, and maybe to hear the business owners take on how it has affected all of us in the  vicinity. There were already issues with the camps that were previously there, but now this.

Today, we are bombarded with calls from our elderly clients saying they don’t feel comfortable coming in here anymore with the “camps” across the street.

It is not only our livelihood being affected, but also our safety as well. We have sacrificed everything for this business and this community!

Also, today, there are multiple fires burning in the “new” camps.  We saw one person dump a bucket onto the fire, and watched as dark black smoke billowed up into the sky. Another man was jumping up and down, running in circles and throwing his hands up and down as he looked from side to side, he had just emerged from a Johnny on the spot that had been brought in by the city. He appeared to be under the influence of something, and he was not alone.

My business partner and I observed  multiple cars, U Hauls, SUV’s, and trucks  pulling  in, setting up tarps and tents, hanging up clothes lines, and making an otherwise nice view, extremely disturbing and unpleasant.   We drove by and there are at least  30 to 50 tarps and tents as of 1 pm today.  We then drove further on  up the hill to Geri Fields, the tiny house village, that somehow would “help” the homeless who are squatting illegally.  What we saw was a tiny house village that looks virtually unoccupied, well kept, and manned,  and yet the illegal encampment is crawling with humans that are busy throwing their garbage and belongings around, fighting amongst each other, and yelling obscenities as vehicles drive by.  What is the point of the tiny house village if they aren’t going to use it?!

We continue to get multiple complaints about our  location “by the homeless camps” and are told by our clients, they don’t feel “safe” coming in.  Our phones have been ringing all morning from local residents who are frightened and don’t want to come in for their appointments and are cancelling.

Why isn’t the city doing anything TO ADDRESS THE PROBLEM!!   Moving them here FROM City Hall is NOT fixing anything! We feel  like the Mayor is saying, “out of sight, out of mind” by moving them to Fraser street.

We just started this business and we have worked so very hard to help this community, and yet here we are already looking into having to VACATE the premises, this is not okay.  We will likely not be in  Bellingham city limits if we are forced to move, and maybe not even Whatcom county. We don’t want to have to deal with this issue again.