Sign the petition here on homeless policies to political leaders… 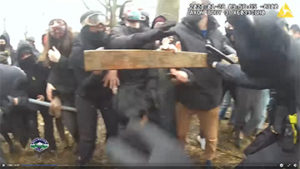 In what the Bellingham Herald calls an “occupied protest” the cleanup of the City Hall/Library Lawn camp did not proceed without incident from agitators and other costumed personages that looked like the Seattle antifa rioters; costumed and armed people doing nothing more to solve the homeless problem except trying to hurt cops. 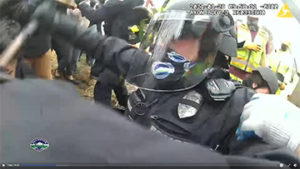 serves very little purpose for our homeless population but continues to make the argument to increase funding for police. 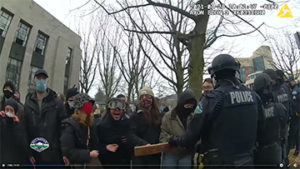 Cost of State Patrol to serve as backup of Nov 22nd violence at the day of cleanup:

There were five arrests as a result of incidents all suspects have been released at this writing. Estimated to be $53,000.00 for the State Patrol; we are still waiting for the release of figures from The City of Bellingham and Whatcom County.  We also understand that the Border Patrol was involved in the process of removing residents from the dangerous areas around city hall and the Library.  Federal dollars were also expended. 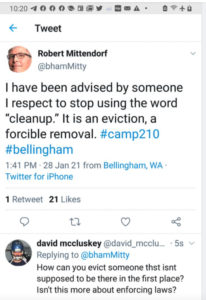 In a tweet dated on the 28th of January; the same day the video above showed 5 people being arrested; Reporter for McClatchy Robert Mittendorf tweeted out that the clean up was not a clean up but an “eviction, a forcible removal”.

Several Groups Deplore the Clean Up of downtown Bellingham

AND the removal of a population that in many cases have refused help with their addictions and circumstances and cause security and health problems where ever they camp.

They refer to themselves as community organizations although at least three of them:”The Whatcom Democratic Socialist of America; The Riveters Collective; and Indivisible Bellingham” have heavy connections to politics and in some cases appear on the Public Disclosure Commission as donors to Democratic Party causes.

You may remember that the Socialist were the subject of a Fourth Corner article here as they held a “protest” in the yard of the Bellingham Mayor. Mayor Seth Fleetwood’s home faces planned protest on Sep 4th by Whatcom Socialist and Others… Local officials object to protest. Link Here.

Here is their statement:

“As a group of local grassroots community organizations concerned with justice and human rights, we come together to publicly condemn the openly militarized use of force displayed in sweeping the encampment at 210 Lottie St. on Thursday, Jan. 28th,”.  “We call on the Mayor to reverse the course of escalating violence and intimidation and immediately cancel the sweep of the encampment at Geri Fields that is scheduled to take place on or before Friday, Feb. 5.”

From the local Democrats

“Yesterday’s sweep at the City Hall homeless encampment raises disturbing questions and doesn’t address the underlying problem. It merely pushes it elsewhere, out of sight and out of mind of our elected leaders.

We are deeply concerned about a series of decisions made by the mayor: