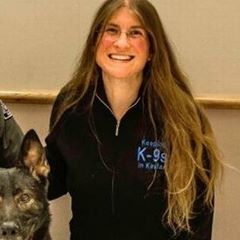 Whatcom resident Kendra Cook is well known for her work to protect K-9 Bomb detection dogs and their handler and has created a nationally recognized fundraising program for K9s and K9 protective gear, along with other equipment for handlers.  Kendra is not paid for her work and 100% of donated funds go to K9 needs. She has a degree in surgical technology and paraprofessional education, and is actively involved in the Village Books Memoir Writer’s Group.

Kendra recently appeared in an article in Police1 magazine presenting her concern about policy makers education concerning first responders.  She state’s “Even with all of my volunteer experiences; I know I may not be qualified to make decisions pertaining to law enforcement.  However, some lawmakers with even less law enforcement education than my unqualified self are elected to do so. I hope to assist in making more education available about our officers and the community’s safety.”

Police1.com is a national newsletter that states it is: “The One Resource for Police Officers and Law Enforcement”.

In an article by. Chief Joel F. Shults, Ed.D. police1.com describes Kendra’s and other’s idea on how to educate policy makers.

This is reprinted here by permission of the editor in chief Nancy Perry.  If you’re interested in Police1; registration for the site is here.

“A police advocate’s simple suggestion: Walk a simulated mile in a cop’s shoes

In Washington State, a local police department needed supplies for a K-9 bomb detection dog, including the dog. Police civilian volunteer Kendra Cook took up the challenge and began what is now a nationally recognized fundraising program for K9s and K9 protective gear, along with other equipment for handlers.

Her advocacy did not stop there.

When helping to present the debut of the new K-9 for her police department at a city council meeting, she was stunned to hear how little the council members knew about the police operations of their city. Knowing about police simulation training available through VirTra, she reached out to the company for help with an initiative to get simulation scenarios made available to government policymakers

While corresponding with VirTra, Cook reached out to political leaders in her region to ask if they would be willing to engage in a simulation experience to enhance their understanding of law enforcement issues they legislate about. She received boilerplate responses saying “Thanks for writing and we’ll pass that on,” but no affirmative responses to the offer yet.

Cook began to think about how to connect with lawmakers in more effective ways: 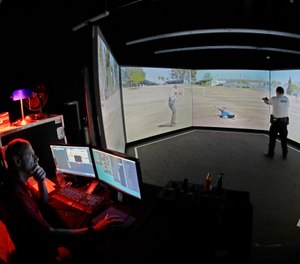 Meanwhile, a representative from VirTra stayed in contact with Cook, offering availability of their products already deployed in the region to council members, commissioners and legislators. The company already had simulation scenarios for civilians for community engagement and education purposes. Careful to keep tactical information confined to law enforcement professionals, the civilian scenarios have had a universally positive impact on helping civilians understand the complexity of decisions officers face.

Potential additions to current civilian simulation scenarios could include protocols for concealed carry permit holders when in contact with police officers, how citizens can respond near a K9 operation, or best general practices if pulled over by police.

Legacy systems from the 1980s started as training in simple decision-making – shoot or don’t shoot. Early systems showed a video on a laserdisc that froze once a sim shot was fired. Subsequent products began branching into more complicated scenarios and more realistic weapon reactions.

Today’s most sophisticated systems provide the trainee the opportunity to engage with de-escalation techniques like slowing things down, listening to the simulated subject and responding to an Autistic person, and include a variety of non-force scripts that can lead to successful de-escalation without the use of force.”

Read the rest of the article here.