In a direct tie in to local Whatcom County Council, Water Issues and the Hirst Court Decision, the Democrats refuse to come to the floor to debate on the solution to Hirst and funding the Capital Budget.  Rumors have it; many Democrats thought the Senate Fix would pass in the House.

The Fourth Corner has learned that it may very well have been part of a power struggle between sitting Speaker Frank Chopp (D) Dist 43 and one of the Representatives leading the charge to stop the Hirst fix from reaching the floor an appointed Democrat from Seattle: Noel Frame. Rumor has it that a letter was given to current speaker Chopp with 20 or so Democrat Representatives names on it.  The upshot of the letter, we are told, was that if Frank Chopp allowed Hirst to be brought to the floor to be debated and voted on;  his position as Speaker would be challenged directly from the floor.

Special Interest Stop Hirst Legislation from Reaching the Floor of the House.

The Representative, Rep. Noel Frame(D), from the 36th District located in Seattle Proper(Lake Union,and Elliot Bay) was appointed to the State House last January to serve out the term of Rep.Reuven Carlyle(D).  She is said to be one of Democrats challenging the Speaker on bringing Hirst to the floor.

Special Interest Connections — Whatcom County to the Democrats in Seattle: Follow the money

There are other special interest involved in blocking ANY action on Hirst and the Capital Budget; the Fourth Corner sources tell us that the night the budget was approved the lobbyist for the Tribal Nations of Washington knocked on Democrat Representative’s doors to lobby hard to make certain Hirst did not come to the floor of the House.

Here is one of Rep. Noel Frame’s(D) Campaign statements on Working Families; the irony is obvious:

“In tough economic times like these, we need to do everything we can to stand up for working families. This includes protecting living wage jobs with benefits, expanding access to affordable health care for all and stemming the tide of cuts to critical social safety net services.”

It seems she wants to stand up for working families UNLESS they want to build a home on one of the thousands upon thousands of acres that have been taken away by the Hirst Decision.

Whether the Hirst Fix and Capital Budget get to a vote of the legislature is now up to the Democrats and Governor Inslee as the Republicans are ready to pass a capital budget once the “Permanent Hirst Fix” is passed and signed by the Governor.  There ar Democrat Representatives up for election in 2018 that Represent Rural areas most effected by the Hirst taking.  It will be interesting to see how they do in explaining the NON-Vote on Hirst. 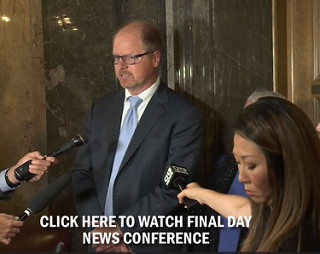 It may be the most impactful private property rights issue in the history of our state — the Hirst decision. Last October, the state Supreme Court created an artificial water crisis that threatens the right of rural and suburban property owners to drill new wells for household use.

Under the court’s Hirst decision, every new proposal for a small well requires a costly study to prove it won’t harm fish. Some counties have already stopped granting building permits. No water means no development, property values will plummet, and those property taxes will be shifted to those who already have established developments, including businesses and family homes. (To learn more about the impacts, I invite you to read an opinion editorial by my seatmate, Rep. John Koster, and 7th District Rep. Jacqueline Maycumber, here.)

A Republican-sponsored measure, Senate Bill 5239, to permanently roll back the Hirst decision passed the Senate four times. However, Democrats in the House have refused to bring the bill to the floor for a vote. Instead, during negotiations, they offered a temporary 24-month window for wells to be dug, with a provision that would have given Native American tribes final authority over water decisions. After the two-year window, Hirst would remain permanent. That is totally unacceptable to us and to property owners across the state of Washington.

With great disappointment, I issued this statement. I want to be clear House Republicans are willing, ready and hopeful to return at any time to Olympia to pass a PERMANENT Hirst fix AND a capital budget. These are important issues to us and the people of Washington state need and deserve BOTH.”