After KUOW and KOMO had separate reports (our story is here) on the December 22nd Custer Washington Oil Train derailment Senator Doug Ericksen called for a full investigation into the events of Dec 22nd by the State Legislature.

In addition, for years a moratorium to prevent growth at Cherry Point has been renewed by the Whatcom County Council (our story is here) with one of the concerns of environmental interests’ being the oil trains coming to the refineries of Cherry Point derailing and creating a disaster scenario…  The quick action of our first responders may have put much of that concern to rest but the reason for the derailing needs to be explored to make certain of any remaining concerns.

His COMPLETE press release with the reasons he believes the State should investigate follows:

Ericksen is calling for legislative hearings into the Custer, Wash. rail accident, following disclosures that indicate deliberate tampering with rail equipment is the likely cause. A former investigator for the National Transportation Safety Board told KUOW radio this week that it took specialized knowledge to decouple the train and release air brakes in order to send the train’s midsection careening off the rails. Union officials have raised the same point during internal BNSF investigations. 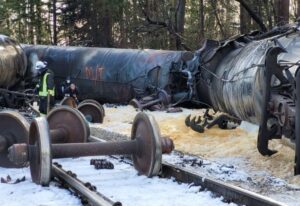 every one of us, even those who oppose the use of fossil fuels,” Ericksen said. “It is precisely the sort of case I warned about in 2016, when I introduced legislation providing special penalties for unlawful protests that aim to disrupt and destroy. As we watch footage of the fireball at Custer, I think everyone has to agree, if this was a protest, it certainly was not a peaceful one.”

No lives were lost in the Custer incident, in which seven fully loaded tank cars ran off the tracks and three of them exploded. Fire crews battled to prevent others from being engulfed in the heat and flames. A witness recalled seeing two young men in the vicinity of the train, where it had been left parked and unattended shortly before the incident occurred.

No organization has stepped forward to take credit for the destruction. But the incident remains under investigation by an FBI ant-terrorism task force, following other protests aiming to disrupt shipments of crude oil by rail from the Bakken fields of the Midwest to the refineries of Northwest Washington. Two Bellingham residents were arrested last year after 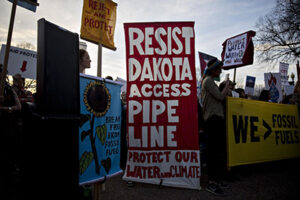 allegedly attempting to place shunts on the tracks that could cause derailments. Other notable protests include a 2016 demonstration at a rail chokepoint in Skagit County blocked the main line between Seattle and Vancouver for 11 hours. In 2014, oil-train protesters tied themselves to poles they erected over the tracks in an Everett rail yard and forced crews to cut them down with cherry-pickers.

“We know many environmental organizations have a deep-seated ideological opposition to the use of fossil fuels, and that the heated rhetoric surrounding this issue has whipped some misguided individuals into a fervor. Conflating incidents like these with peaceful protest is to condone acts of domestic terrorism. I think it would be wise for Climate Solutions, the Washington Environmental Council, the Sierra Club and other leading environmental organizations in this state to strongly condemn this behavior and disassociate themselves from anyone who takes their cause to violent and potentially deadly extremes.”

Ericksen said the incident calls attention to the need for legislation like his Preventing Economic Destruction Act, which would have provided longer sentences for illegal, unpermitted protests designed to create economic disruption. The bill also would have allowed prosecution of those who fund and promote such acts. He is calling on lawmakers to hold hearings on the Custer incident prior to the 2022 legislative session. New legislation remains a possibility.

“I think what happened in Custer ought to open a few eyes,” Ericksen said. “This isn’t peaceful protest. This is terrorism. We can’t indulge it any longer.”