Geri Field Clean up seems to proceed without Police enforcement

The Geri Field on 1300 Fraser Street was cleared this morning by Bellingham Public Works crews as the City Council took testimony on a new “homeless” sales tax of .001. One of the statements is below: 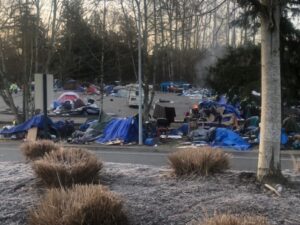 Meanwhile at Geri Field the fires were still lit when Bellingham Public works moved in to clean up the site.

It was much the same scene without the police presence that accompanied the January removal (some in the press call it “eviction”).  But their were efforts to help people get the help they need by several tax supported non-profit organizations.

Comment by resident summarizes some of the trade-offs between enabling the homeless person by allowing drug use and allowing police to enforce drug usage laws done in public.

“Base camp has rules and it traumatized them. But apparently sexually assaulting young girls. Propane explosions, hatchet attacks and bricks being busted over campers heads is fine because they can use drugs.”

Has the problem just moved to another area of the city… (about a mile and half closer to the Mayor’s house)?

This did not prevent the movement of many residents from Geri Field to Laurel Street Park near WWU. By this morning there were at least 15 tents on a playfield meant for the neighborhood children and adults. 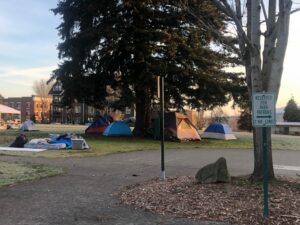 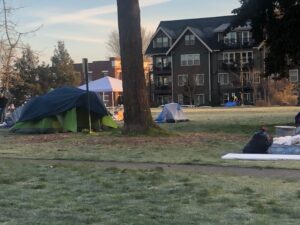 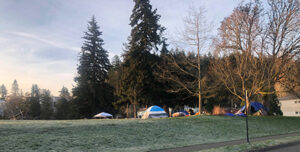 We include a map of where the park is in a WWU neighborhood; to hopefully aid residents in the new homeless zone 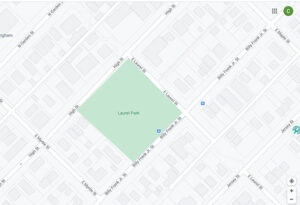 from being accosted or out after dark .  And even though COVID rules are getting less stringent from past experience many would recommend that resident’s children not visit this park without parents present and be ready for possible violence, bullying, drug use and dealing with people who don’t desire any help. 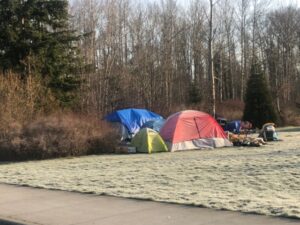 In addition the area just north of Sunset Pond Trails and parks has also become more occupied by mostly people who also are enabled by people in the community to live the homeless lifestyle.

And Finally there is hope to be had here in Whatcom County In Executive Director Hans Erchinger of “Base Camp” states HERE on KGMI that about 25 people camp to an outreach session held by Base Camp and 4 or 5 said they would try out base camp.  He also stated that there are about 40 beds currently available at the Base Camp facility; but that changes by the night.  Base Camp has over 15 different provider connections but because of the safety issue will not allow drug use or dealing in their facility.